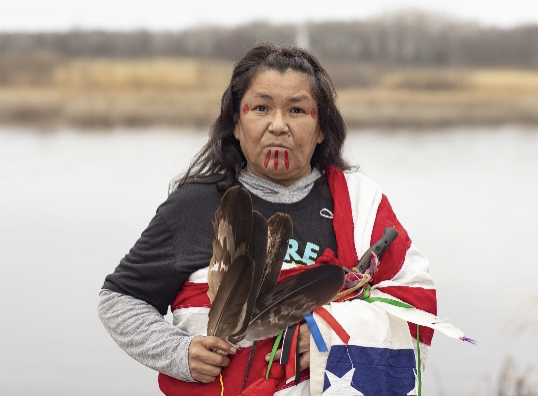 Gallery Open: Participants are invited to visit the photo and story exhibit prior to Dec. 1. The gallery is open Monday-Friday, 9:00 a.m.-4:00 p.m., Sundays, 9:00 a.m.-noon, and by special arrangement with a call to Unity Church.

John Kaul became aware of efforts by Indigenous peoples to protect the accessible Earth’s fresh water, to warn us of the consequences of exploitation of the Earth’s resources. His inspiration came from two indigenous women: Sharon Day, Executive Director of The Indigenous Peoples Taskforce and leader of the Nibi Walk movement, a spiritual effort. She organizes walks along major and many minor North American rivers. She says, “each step is a prayer.” Her life’s work of serving others has been done with optimism and only with love. Tania Aubid, a human fireball, believes in direct action and has been deeply involved in pipeline protests. She and others put their lives on the line through civil disobedience to block progress on pipelines through Native Land. Tania’s fire comes from her legitimate outrage at the abrogation of treaties, broken in the past and today. She believes, “There are two sets of laws in the United States. Laws protecting white Americans which are honored and enforced and laws protecting people of color which are ignored.” The twenty portraits in this exhibition show protectors and their stories. Photographer John Kaul is well known in Minnesota government circles where his many associations go back years due to his work as political staff, lobbyist, and government relations. He established a photography avocation including candid photos of political leaders and others. He has created documentaries on the Mississippi National Park and St. Croix River and co-produced “Girl from Birch Creek” featured on Twin Cities Public Television.

This exhibit also will feature an event featuring Kaul, Day, and Aubid who will discuss the ongoing efforts to protect the waters of North America. Particular attention will be given to the protests against the Dakota Access Line at Standing Rock and Line 3 in Minnesota.